McGill University is one of Canada's best-known institutions of higher learning and one of the leading universities in the world. With students coming to McGill from some 150 countries, our student body is the most internationally diverse of any research-intensive university in the country. McGill was founded in 1821 thanks to a generous bequest by James McGill, and since then, we've grown from a small college to a bustling university with two campuses, 11 faculties, some 300 programs of study, and 40,000 students. The University also partners with four affiliated teaching hospitals to graduate over 1,000 health care professionals each year.

A Tradition of Success

McGill is recognized around the world for the excellence of its teaching and research programs. Ernest Rutherford's Nobel Prize-winning research on the nature of radioactivity was conducted at McGill, part of a long tradition of innovation on our campuses that includes the invention of the artificial blood cell and Plexiglas. Today our professors are building the new field of epigenetics, developing alternative energy sources from crop plants and driving human achievement in every field imaginable. Our 250,000+ graduates form a vast global network, with many alumni reaching the top of their professions as Supreme Court Justices, award-winning authors and musicians, astronauts and more.

In addition to a stellar faculty, McGill is known for attracting the brightest students from across Canada, the United States, and around the world. McGill students have the highest average entering grades in Canada, and our commitment to fostering the very best has helped our students win more national and international awards on average than their peers at any other Canadian university. The prestigious Rhodes Scholarship has gone to a nation-leading 138 McGill students. The ability to balance academic excellence with the extracurricular is another hallmark of the McGill student. In addition to a rich athletic tradition that includes many Olympians and the birth of hockey and football, thousands of McGill students participate in the hundreds of clubs, associations and community groups that enrich Montreal and contribute to a vibrant campus life.

The mission of McGill University is the advancement of learning and the creation and dissemination of knowledge, by offering the best possible education, by carrying out research and scholarly activities judged to be excellent by the highest international standards, and by providing service to society. Motto Grandescunt Aucta Labore (By work, all things increase and grow.) 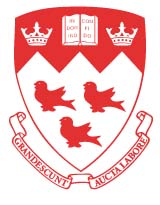 The McGill coat of arms is derived from an armorial device assumed by James McGill, founder of the University. The patent of arms was granted by England's Garter-King-at-Arms in 1922 and registered in 1956 with Lord Lyon King of Arms in Edinburgh and in 1992 with the Public Register of Arms, Flags, and Badges of Canada. In heraldic terms, the coat of arms is described as follows: "Argent three Martlets Gules, on a chief dancette of the second, an open book proper garnished or bearing the legend In Domino Confido in letters Sable between two crowns of the first. Motto: Grandescunt Aucta Labore." The coat of arms consists of two parts, the shield, and the scroll.

1. RANKING AMONG PEER INSTITUTIONS 1st in Canada among medical-doctoral universities for 11 consecutive years (Maclean's University Rankings 2016) 24th in the world (QS World University Rankings 2015) 39th in the world (Times Higher Education World University Rankings 2014/15) 1st or tied for 1st among Canada's large universities in information technology, city satisfaction, reputation with employers and libraries (Globe and Mail’s Canadian University Report) 2. THE FINEST STUDENTS McGill is known worldwide for its sky-high entering grades, and our students have counted an astounding 139 Rhodes Scholars among their ranks—more than any other Canadian university. Each year, they earn armfuls of prestigious awards and prizes for academic and athletic achievement, and in Canada's May 2011 election, five of our students defeated incumbents to become some of the nation's youngest-ever Members of Parliament. 3. McGill FIRSTS The discovery that atoms are divisible. The first map of the brain's motor cortex. The inventions of Plexiglas, three major sports, and the artificial blood cell. For more than 190 years, McGillians and their Eureka moments have been changing the world for the better. 4. WORLD-BEATING ALUMNI They live in some 180 countries. Their ranks include world leaders, astronauts, Nobel laureates, and a host of trailblazers in the worlds of art, science, business and public service. In a 2013 survey, employers ranked McGill's degrees as the 37th most-prestigious in the world. Across borders and disciplines, McGill’s 250,000+ living alumni are using their education and experiences to make a difference in the world. 5. A REPUTATION FOR RESEARCH With a strong focus on interdisciplinary work, we rank among the finest research-intensive universities in the world and carry on a tradition of excellence that includes Sir Ernest Rutherford, Wilder Penfield, Charles Taylor and many others. Today, our researchers are making great strides in a wide range of fields, from green chemistry to nanotechnology, from the science of food to the secrets of genomics and proteomics. 6. CANADA'S MOST INTERNATIONAL UNIVERSITY McGill is one of Canada's best-known institutions of higher learning and one of the leading research-intensive universities in the world. With 24% of our students coming to McGill from more than 150 countries, our student body is the most internationally diverse medical-doctoral university in the country. Our top-notch internship programs place students across the globe, and our alumni live in more than 180 countries worldwide. 7. AN EFFERVESCENT METROPOLIS Montreal sits at the meeting point of the Old and New Worlds. It's a city of cobblestones and an international hub for aerospace, pharmaceuticals, software engineering and more. It's a safe, vibrant place bursting with a culture that consistently ranks among the world's most livable cities. Montreal is home to some 220,000 post-secondary students, as well as a wealth of green space, and the hundreds of cafes and restos for which Montreal is famous. In fact, the city ranks as the 8th best student city in the world. 8. A COMMITMENT TO SUSTAINABILITY We're passionate about sustainability, and we're doing something about it. McGill's Vision 2020 Sustainability Strategy sets an ambitious agenda for a greener, fairer, healthier future, and our Sustainability Projects Fund offers $840,000 of seed funding each year to projects that help us get there. Since 2009, we have funded a wide range of initiatives including urban gardening projects, a bicycle collective, green waste management systems and more. 9. NOBEL PRIZE-WINNERS McGill counts twelve Nobel Prize-winners among its faculty and alumni—the most of any Canadian university—whose contributions include the technology behind digital cameras, the discovery of how the human body protects its genetic code, the theory of electron transfer, groundbreaking work on visual perception, hormones and particle interaction and the discovery of dendritic cells, with their immune signaling pathways that control and drive the immune response. 10. A GREAT PLACE TO WORK At McGill, we know the importance of attracting the best and brightest: from our students to our researchers to our employees. That’s why we do all that we can to ensure that McGill is a place where everyone thrives, and we’re proud to say our efforts haven’t gone unnoticed. We have again been named one of Montreal's Top Employers for 2015.

Can you send me more information about this program?

Where is this school located?
Where is the campus located?

What other funding options do you have for this program?

In what language is this program taught?